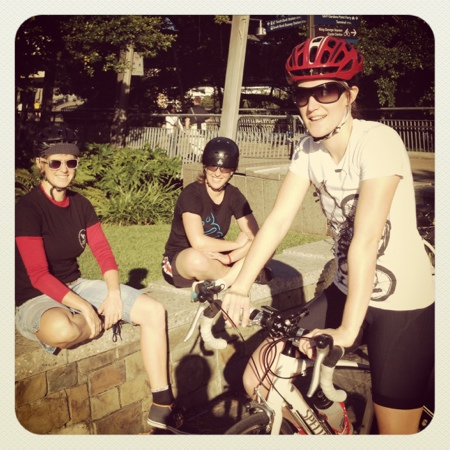 So I did this radio announcer’s course recently and at that course they recommended that you talk to the radio as if you’re talking to just one person because that was the nicest and most intimate way to talk to a radio audience.

Sometimes, with a blog and whatnot you are actually only talking to an audience of one and that’s kind of reassuring. And so it was with the invitation to the Cyclofemme ride because, to be honest, with how tired I was feeling with the show, I was not sure I wanted to go on a ride on Sunday morning, since mainly I thought that I would feel like falling asleep which I did.

Luckily my ride companions, while small in number, were dedicated in spirit!

We took ourselves along the river, avoiding the Mother’s Day fun run yet benefiting from the inspirational vision of a lot of other people doing exercise at the same time. 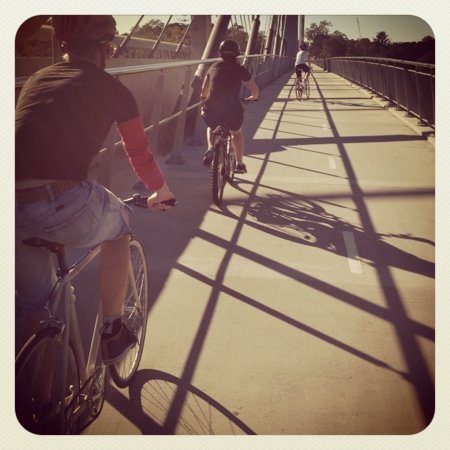 And then we talked, mainly because we were just going for a ride, this talk was of the weather, how nice is the sunshine and how nice was riding etc.

But there is one story that has stayed with me.

At the time the police rode 1200cc motorbikes which they told Ellen’s mother would be too hard for a woman to handle and so as a result she was not allowed to join the police motorbike people. She responded by turning up to work one day on a 1900cc bike and wondering if they that was too hard for her to handle too.

Well, circumstances (i.e. the birth of her first child) eventually prevented Ellen’s mother from finding out if the motorcycle corp would take her, but it’s an amazing/sobering thing to think that even in our own country and in only a few short decades so much has changed.

Maybe we didn’t need to organise a bike ride here, because in this day and age, it’s just your average bike ride, not something to think about. Or is it?

Thanks to the Cyclofemme crew* for encouraging us to ride – sometimes it’s nice to remember those who’ve come before and feel grateful for all that you have.

*I’ll be sure to be a social media good citizen and send you some links and pics and whatnot.