This morning’s commute felt utterly utterly awful. Terrible weather meant that I took out the mountain bike, and because I haven’t ridden the damn thing in weeks, that experience was completely disorienting. My legs felt wrong, and awkward and too long and – if you have ever seen my legs – you would know that it is not possible for my legs to be too long. 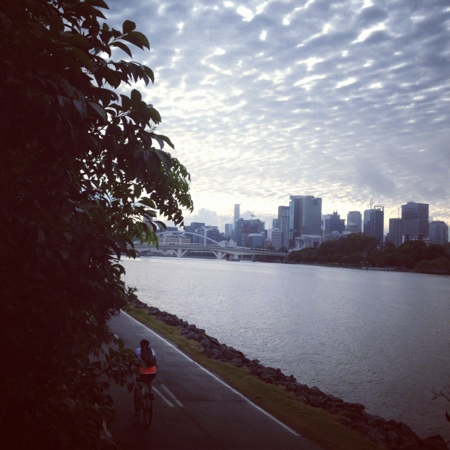 I used to have a project called Project Look Up. Sometimes I wonder if cycling isn’t just a proxy.

I also have another project called She Stole My Every Rock and Roll. It’s with a lovely poet called Betsy Turcot and I think that if you rode your bike to any of our shows between the 10 – 19 May as a part of the Anywhere Theatre Festival and you bring in your little bike helmet so that I know (on your honour) that you rode your bike there, then I think you can have a free zine. I think Betsy will allow me to do this.

I won’t assume that cyclists love poetry, or that you are based here in Brisbane but if you are and you do. Then I would be honoured if you would come along to the show. Poetry, it’s one of the few things I love as much as cycling. It’s a two person poetic dialogue set in a very cute record store in West End.

Here’s a little bit of what it looks like.