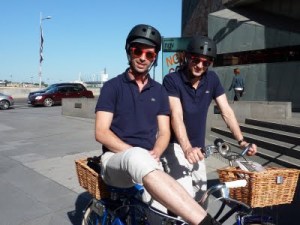 When I was a little tacker and my bike had pink tassels on the handlebars and plastic daisys on its white basket and spokey dokeys, there was an advertisement on the television, with kids in primary coloured t-shirts, who had neat fringes and “wow mom” expressions. Now, I can barely remember the purpose of the game, or much beyond the fact that there was some sort of plastic bubble that you pushed down to make the dice roll. Or maybe that was Boggle. Nah, that’s letters in a plastic dome. Could have been Hungry Hungry Hippos. There was pushing in that one, wasn’t there? Though in my family we’d had to replace the little white balls with Kool Mints after they all rolled under the mysterious corners of the random pieces of furniture. Sometimes if we were lucky, we got Kool Fruits.

The point is, at some point in this advertisement from way back in the day, one of the little kids said, “I’ll give you double trouble” in a really high-pitched, irritating voice. And it’s kind of stuck with me until now.

Again, I’m not sure why this story started, or where it’s going.

The point is, it’s not every day you run into two men in matching clothes, on matching bikes, with cute baskets and matching helmets.

So what if they were advertising some sort of beer? I’ll have forgotten all about that later.

(Naturally, while I was downing said Kronenburg (sp?) in said sun dappled bar watching the ladies collect after the Spring Carnival, I can’t say I was complaining.)