Just when you believe the message is being lost, that you’re all alone in a wilderness, that life is simply a tundra of alienation and you and your stupid dreams, well, they’re nothing, then suddenly from this cactus-strewn hell, comes a beautiful soft voice whispering in your ear, lips gentle on your skin, letting you know “if you build it… they will come”.

And lookee-here! I was picking up my morning coffee (okay, not coffee for anyone who actually knows me, but hot chocolate sounds so freaking lame and I’ll get back on the good stuff any minute now) and guess what I saw – 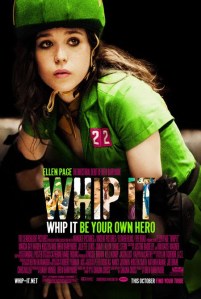 (Swear, they don’t play the Devo song during this film at some point, and I’m honestly going to question the value of such a naff film title – however, at this stage, I’m spending my hard earned for this puppy on basis of the lid count in the promos alone.)

You may also care to watch the clip. They had me at “alternative to what?” but having remembered fondly schlepping out to Reservoir to watch Victoria’s own women’s roller derby league teams fighting it out to be the second best of two teams, I was in. Good times kids. Good times.

And, if the winsome/snippy/geek-glasses delight of Ms Juno don’t really ring your bell, then there’s the surprisingly un–hateable Drew Barrymore (trust me, I’ve tried), and Juliette Lewis (for those of us old enough), inevitable shots of women punching, a high probability of a montage scene and (did I mention?) plenty of lid popping action.