Well now I know what I was talking about. God damn… This just about busted my inbox.

Just when I was wishing for a bicyle lady in a skull helmet, she tops with…. a skull-lady in a bicycle helmet.

October 30 can’t come soon enough. I do have a broom stick, but I’m having trouble working out how to attach it to my bike. And, curiously enough, someone left behind several fake moustaches at a party at our house a while ago and now I’ve a hankering to wear one. Incognito.

But this! It’s like La Calavera Revolucionaria (see below) decided to ditch the gee-gee and upgrade to a bicycle before unleashing unholy havoc for this year’s Dia de los Muertos. Right after this glass of bubbles. 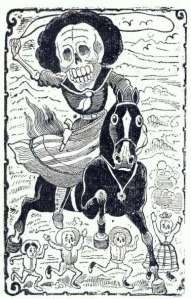